Yeah, it's done! Here is Mikey's own page on Internet. The whole true story about him from beginning to end. All about love and hate and his famous haircut. Names of persons and locations are real, in D-world, but don't mix them up with your own world;) Enjoy it!

Long, long time ago, little Mikey was born in freedom, somewhere in D-land. Parents loved him much and he could grow up in warmness and harmony. Environment was so good, that Mikey could develop himself very well and could gain many experiences. His outside appearance changed from time to time, but the remarkable similarity to another famous inhabitant of D-world always remained (see when moving mouse over picture to the right or following the attached link)

Mikey was a good listener and absorbed knowledge and wisdom from his friends and people around him. Logical and abstract thinking was his big advantage in handling complex, unexpected and most difficult situations - in professional as well as in personal life. His versatility enlarged his opportunities of being successful in every task. Some people were jealous of his prosperous way, but Mikey didn't care about them. And others never saw his inside values, only found impression about him from outside view. Mikey never understood them, who didn't take or want to take time to get to know to him before judging! But nothing of this kind could stop his professional way to reach targets, higher than others could imagine. Skills and experiences made him famous and most desirable. Being his own boss still remained in his mind. Being responsible for fair and well based research and development was his life-long target. And additional pursuing always a mild progress.

One day Mikey suggested to make a long journey. Not just for vacation, in fact a business trip to a remote place on D-World, called Seeland. He wanted to make first experience in dealing with those inhabitants there over. Late in year he asked his best friend Goofy to help him in his undertaking. They arranged a meeting and planned first steps. Mikey also did much planning and organizing on his own and finally on a snowy day he boarded the plane to Seeland, very far away. He was looking forward to reaching the place, famous for its rich and long lasting culture, praised for its big power and business vitality.
After a long, long flight he arrived in Seeland and Goofy, who already went there some weeks ago, welcomed him at the airstrip. "Great land, great city!", Mikey's first words. Surprised of this crowded place Mikey first had to relax a bit. And then he started his big See project. Many contacts had been made. Mikey enjoyed negotiations and at most the life style. The natives loved to eat, healthy and delicious meals. But business was hard and took much, much time. Over months he and his partners made negotiations, very stressful and complex. 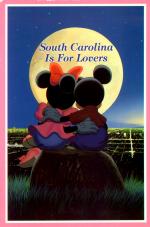 But as Mikey had so tight contact to each of his partners, who were quite open and spoke in a direct way, he was delighted and enamored by one of them. By the time they both fell in love and they arranged a bit their time schedule fitting to each other. Minnie, this was her name, already thought about future plans, and Mikey invested much energy to develop a mutual life, to fulfill her wishes and both of their dreams: a happy, satisfying life, full of love and progress.
Time went by and they shared a life of ups and downs, harmony and dispute, happiness and sadness. Many unexpected situation had been overcome. Mikey was happy having found the partner of live. And friends were glad, too!
She was not perfect, but warmness, support and honesty were the main reasons for being together. And Mikey was impressed by her strength and vitality, her view of reality. And the most valuable advantage was: she made up the missing parts of their entirety. There was respect of strength and weakness of both of them and much understanding of differences.

He loves her so much, forever!

nd if Mikey has not yet died, he is still living somewhere in D-World, happy and satisfied ...
and Minnie is sitting besides him.